Mr. Asbury B. Crocheron, sheriff of Owyhee county, was born at Long Tom, Lane county, Oregon. October 25, i860. From there he moved with his parents to Idaho City, and in the spring of 1867 came to Silver City. He was educated in tiie ]nil)lic schools of Silver City, with the advantage of one year in Portland. Until the last few years he has been engaged quite extensively in the stock business, and was recognized as one of the most daring riders and best "ropers" in this section. Mr. Crocheron was elected assessor and tax collector for the 1890-2 term, and was re-elected for the same office, without opposition, for the 1894-6 term. He was then elected sherifT of the county in 1896, which ofifice he fills in an able manner. He was married October 14, 1897, to Mrs. Millie Walston, of Reynolds. He is a member of the I. O. O. F. fraternity. 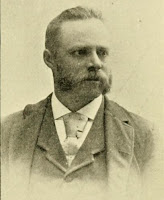