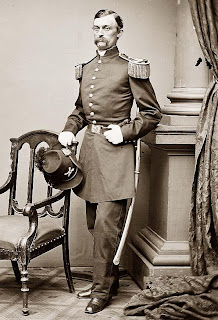 SIR: Yesterday, after the enemy opened fire on the troops under your command, in accordance with your instructions, two rifles pieces of Battery D, Fifth Artillery, were placed in position some 1,800 yards from the enemy's battery and opened fire, and continued firing until the enemy ceased firing or until Lieutenant Hasbrouck. Some time after Lieutenant Hasbrouck placed his pieces in battery the remaining two pieces of the battery under Lieutenant Hazlett joined and came into battery. The enemy at this time had ceased firing and the cannoneers were resting for the want of a target. Some twenty or thirty minutes after this the enemy showed himself in a little cleared place, whence a roudn from the guns showed him in a full run. From the first position of the rifled pieces some 40 rounds were fired, alls hell, and from the second position some 18, to which the enemy made no reply.

The conduct of the lieutenants (Hazlett and Hasbrouck) was that of gallant soldiers, and of the men of the battery all that could be desired. It affords me much gratification to testify to the coolness and handsome deportment of the Vermont third and some 80 men of the Second Vermont, who were ordered to support the battery. They were for about an hour under a very warm fire from the enemy's artillery.
I am, very respectfully, your obedient servant,

No. 38. Report of Captain Charles Griffin, Fifth U. S. Artillery.

COLONEL: In compliance with your instructions, I have the honor to report that Battery D, Fifth Regiment of Artillery, arrived on the battle-field near Manassas at about 11.30 a.m. on the 21st instant, after a march of near twelve miles. The battery immediately opened on the enemy's battery at about one thousand yards' distance, and continued firing until his battery was silenced or forced to retire. The battery then advanced about two hundred yards, and opened upon a regiment of infantry formed upon the right of their line, causing it to fall back. The battery then changed position to the right and front, and opened upon a regiment formed near the enemy's right and a little in front of the one first referred to, doing deadly execution, and causing it to retreat in much confusion.

An order was then received through Major Barry, Fifth Artillery, to advance to the brow of the hill, near the position occupied by the enemy's battery when we first arrived on the field. The battery opened upon the enemy's battery amidst a galling fire from his artillery, and continued firing for near half an hour. It then changed position to the right and fired two rounds, when it was charged by the enemy's infantry from the woods on the right of our position. This infantry was mistaken for our own forces, an officer on the field having stated that it was a regiment sent by Colonel Heintzelman to support the battery. In this charge of the enemy every cannoneer was cut down and a large number of horses killed, leaving the battery [which was without support except in name] perfectly helpless. Owing to the loss of men and horses, it was impossible to take more than three pieces from the field. Two of these were afterwards lost in the retreat, by the blocking up of the road by our own forces and the complete exhaustion of the few horses dragging them. The same thing happened with reference to the battery-wagon, forge, and one caisson. All that is left of the battery is one Parrott rifle gun and one 12-pounder howitzer limber.
Of the 95 men who went into action 27 are killed, wounded, and missing, and of 101 horses 55 are missing.

In conclusion, I would state that my officers and men behaved in a most gallant manner, displaying great fearlessness, and doing their duty as becomes brave soldiers.

I am, colonel, very respectfully, your obedient servant,
CHAS. GRIFFIN,

Numbers 12. Report of Captain Charles Griffin, Fifth U. S. Artillery, of engagement May 27.

SIR: In compliance with the orders of the 27th instant from the general commanding the division the batteries were assigned as follows: Battery C, Massachusetts Artillery, to General Martindale's brigade, Battery E to Colonel McQuade's, and battery D, Fifth U. S. Artillery, to General Butterfield's brigade, and for a detailed account of the Massachusetts batteries attention is respectfully called to the reports of their commanders.

Battery D, Fifth Artillery, left camp near Dr. Gaines' at 5.30 a. m., and arrived on the field of action about 1 o'clock, and by direction of General Porter was sent under the command of First Lieutenant Kingsbury to relieve two pieces of Battery M, Second U. S. Artillery, which were firing on the road to our left. Lieutenant kingsbury directed one section, under command of First Lieutenant Charles E. Hazlett, to move about 200 yards to the front of the position occupied by the guns of the Second Artillery. One piece was placed on a little rise in the road and the other in a plowed field to the left, and opened on two pieces of the enemy, one 6-pounder and one rifled gun, distant about 1,500 yards. The fire was kept up with spirit on both sides for about an hour, when the enemy's guns were silenced. Our guns told handsomely, killing 3 horses and striking one caisson twice, one shot exploding the ammunition-chest of the limber, and according to the information of the prisoners killing 1 man and wounding 4 more and 3 horses. The same source states that our guns dismounted one piece, which was carried away, and completely disabled the section, killing and wounding quite a number of cannoneers.

It is but just to specially call the attention to the commander of the section, First Lieutenant Hazlett, First Sergt. Samuel Peeples, and Corporal Timothy Gready, gunners to the pieces.

The battery fired 169 rounds (10-pounder Parrot gun) of percussion shell and, shrapnel, the performance being highly satisfactory, nearly every projectile bursting. Three privates were slightly bruised, 2 horses killed, 1 (Lieutenant Kingsbury's) wounded. The officers of the battery were First Lieuts. H. W. Kingsbury and C. E. Hazlett, Second Lieutenant L. M. Harrison, H. B. Reed, and C. H. Carrol, all of the Fifth Artillery; and where officers and men, afters and men, after a march of 20 miles through rain and mud, behaved with such courage, willingness, and alacrity it would be difficult to mention any others specially by name.