The Hanging Of William Johnson.

WILLIAM JOHNSON, a colored soldier. He deserted from the twenty third United States colored troops, and on the 8th attempted to commit an outrage on a white woman at Cold Harbor. Considerable importance was given to the affair, in order that the example might be made more effective. JOHNSON confessed his guilt and was executed within the outer breast works about Petersburg, on an elevation, and in plain view of the enemy, a white flag covering the ceremony. Johnson also had confessed he had deserted from another unit, but that unit was not stated. 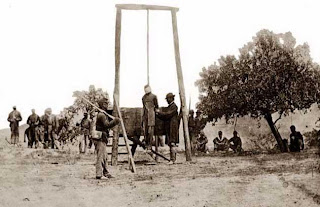 You are viewing unusual images of Petersburg, Virginia, vicinity. The execution of William Johnson, Jordan's farm. William was a negro soldier. He was accused of desertion, and was hung. This image was taken after the trap door was sprung, and William is shown hanging by the neck. It was taken in 1864 by O'Sullivan, Timothy H., 1840-1882. 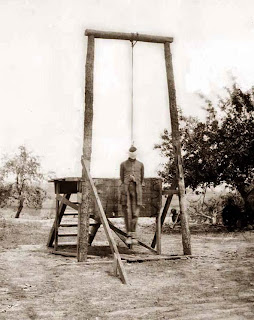 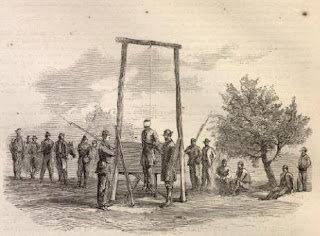 This photo was taken from the Haper's weekly.

Posted by Dennis Segelquist at 12:11 AM

This is not true... The library of congress has the following caption on the picture of William Johnson

Execution of Johnson a colored soldier for attempting to violate the person of a white lady within the lines of the Army of the Potomac. June 1864.

Corresponding print is in LOT 4172-B.

Your statement is true as far as it goes. You have to remember this war and desertion in the military in the time of was is as bad as you can get. Yes he confessed two both, but as this was a military affair and not a civilian matter, so of course more was put on the desertion. But no matter what's under the picture he was hung for both crimes.

The whole thing is probably sime bs, like always back then concocted just for the purpose of killing a black man, he didnt have to be a soldier to get that