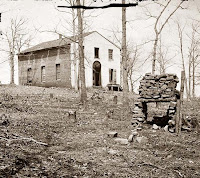 Issac Clark Rodman.
Born July 15, 1843, South Kington, Wasgingtion Rhoder Island. Was the son of Mr. Clark Rodman and Mrs. Fanny Cundall Rodman. He was of the Second Rhoder Island Infantry Company E. He would died on September 25, 1861.
Sudley Church, at Vitginia.
Note. This photo can be enlarged by pushing on it.
Clark Rodman. - Born in Rhode Island; came to Virginia in May last. His examination corresponds closely with a letter herewith in closed*. He refuses to take the oath of allegiance. I think this man liable to be held as a prisoner and I do not see how mercy can be extended to him. But in consideration of his good conduct I should be pleased to see him exchanged as soon as the enemy will exchange.
RICHMOND, September 26, 1861.

I, Clark Rodman,+ from Wakefield, Washington County, R. I., respectfully beg to state that during the month of May last a friend of mine in Buckland, Prince William County, Va., informed me by letter that J. B. and R. H. Hunton, of that place, engaged in the manufacture of woolen clothes were desirous of procuring the services of a man acquainted with the business; that he (my friend) had recommended me as competent and advised me to accept the situation which I did, and on the 1st June arrived at Buckland and commenced to work.

I kept on working until about the 24th July when, hearing that my son Isaac Clark Rodman, had come from the North as a private in the Second Rhode-Island Regiment; that he had been present at the battle of Manassas on the 21st of July and was wounded, I immediately stated the case to my employers, upon which they informed me that I might go in quest of him and advised me to do so. I found him amongst the wounded at Sudley Church on the 27th of July, on which day I was arrested. I was brought on to Richmond on the 30th, and after the lapse of a few days was appointed nurse in the prison hospital under the superintendence of Dr. Higginbotham, C. S. Army. I have acted in that capacity up to the present time, bestowing all the while every possible care and attention on my son, who died yesterday, September 25, of typhoid fever.