Family Farms Of The Civil War. 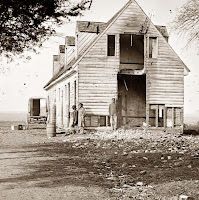 Have you ever wonder if you had a ancestor that may have had a farm at the time of the civil war?, and that farm may have played a part in it? Well here is your chance to find out. There are over one hundred names on this list however most on this list is stated only by the last name only. Now your thinking how will I know if this my ancestor as there are a lot of people with the same last name.

This is true but I can help you by narrowing it down some by given the name of the State, battle, year and any other information to narrow it down farther. If you see a name of interest you can write to me and I well help you all I can. My address can be found in my profile.

Captain Wilder is authorized to take possession of the farm of Jefferson Sinclair, an absentee disloyalist, and the buildings thereon. If the present occupant, Mr. William H. Lynch, will take the oath of allegiance and agree to pay quarterly in advance such rent as Captain Wilder may deem fair for twenty acres of the land and such portion of the dwelling as he needs, Mr. Wilder may allow him to do so; the same also of the Fayette Sinclair farm and its occupant, Mr. Charles L. Collier; the same of Messrs. Hicks and Bowen, on the Booker Jones farm; the same of the farms of Benjamin Hudgins, Eliza Jones, John and Helen Moore, Levin Winder, John Winder, William Smith, Robert Hudgins; the George Booker farm-not, however, disturbing the Howard family; the Lowry farm, the Watts farm, the farm of B. Howard, called the Stakes farm occupied by Mr. Host, and the Armstead farm, occupied by Hicks. The colored persons on these farms, if any, must come under Mr. Wilder's system of labor. The white tenants who will take he oath of allegiance and engage to pay rent as aforesaid are not to be expelled, but only to be limited to such portions of land and shelter as they require for their comfortable support, and are to be notified that any act of disorder or outrage will be visited with immediate removal as well as with legal penalties.
----------------------------------------

Here is a list of farm from different states, some of these names could be first or last names as the reports hardly ever give a full name. These farm were used as camps, Headquarters and reference points. There were many battle around many of these farms and most of them were robed by both the Confederates and Union armies of their cattle, hogs, corn and wheat to keep their armies feed.

GENERAL: In pursuance of instructions received from the major-genera commanding the Middle Military Division, the acting chief of cavalry directs that each of the three cavalry division haul fifty wagon-loads of rails from the farms [of] the following-named citizens-viz, James Gordon, Mr. Pyles, Buck Murphy, Mr. Grimes, and Johnson Fars- and unload them in the immediate vicinity of the Winchester Cemetery, for the purpose of fencing the same. The above-named parties live in the vicinity of the camps of the Second Cavalry Division, and have been guilty of harboring guerillas. The acting chief of cavalry directs that you send fifty wagons, with a proper escort, on Thursday a. m., at 7 o'clock, to the farms of James Gordon and Mr. Pyles, and haul twenty-five wagon-loads from each, and deposit them as heretofore mentioned. The exact locality can be ascertained from Captain Howe, First West Virginia Cavalry, who can be found at the headquarters Second Cavalry Division. This should be ascertained the day previous, that the wagons may take as direct a route as possible. General Fessenden will furnish a guard for the rails after they are unloaded. The commanding officer First Cavalry Division has been instructed to haul fifty wagon-loads from the farms of Buck Murphy and Mr. Grimes, and the Second Cavalry Division fifty loads from the farm of Johnson Fars.

COLONEL: I have the honor to report to you that I started on the 10th instant on a scout with seven days' rations. I left Sedalia at 12 m. with 42 men; proceeded via Georgetown to Longwood. The first 7 miles rough and rocky; 10 miles good road. Plenty of water and wood; forage scarce. Camped 2 miles north of northeast on Hess Creek; good camping ground. Sent out 12 men and 3 non-commissioned officers with instructions to guard some cross-roads. distance marched, 17 miles. Morning of the 11th, received orders by courier to proceed to Marshall and investigate the report of bushwhackers being at the Renick farm, 12 miles northwest of Marshall, attack and destroy them if possible. I broke camp at 5.30 a. m., marched north of northwest to Marshall. Road good; plenty of timber and water; forage scarce. Arrived at Marshall at 11 o'clock a. m.; distance marched, 18 miles. Left Marshall at 11 o'clock at night; marched with muffled sabers; arrived at Renick's farm shortly after daylight the 12th. Could not find an enemy or the sign of one. Fed and got breakfast; went to Mr. Ney's (a good Union man, who lives in sight) to learn the facts in the case.

He told me there had been none at the Renick farm. Camped near the river in thick brush; marched 18 miles. Sent Lieutenant Brown with a squad of men on foot down the river in the timber to watch the roads and the Pinnacles. At night I sent two non-commissioned officers with 12 men to guard crossings; saw no enemy. Marched 17 miles. 13th, broke camp at 5 a. m.; moved through the timber to the Pinnacles. Sent Lieutenant Brown with 30 men with instructions to divide his men and scour the hills thoroughly. Sergeant Sapp was in command of one squad. He found a trail and followed it to the house of Mrs. Haney; saw 2 men run out of the house at the back door over the fence in the brush, about 100 yards from the house; found in the house a rebel mail and a quantity of merchandise, supposed to have been stolen.

Found 2 horses in front of the house 150 yards; at the camp took the mail, horses, goods, and one U. S. mail-bag; arrested Mrs. Haney, two Misses Haney, one Miss Williams, who said they had fed bushwhackers and would again, and gloried in bushwhackers; left Mrs. Haney's; started north; met 2 bushwhackers at a sudden turn in the road; they fired on Sergeant Sapp; he returned the fire; they ran; Sapp gave chase, ran them in the prairie, and then lost them; camped at Mrs. Robinson's, 6 miles from old camp. Sent out at night 20 men on foot in command of Sergeants Patton and Beeks, to guard house and roads; saw 1 bushwhacker, fired at him; can't tell if he was hit or not. 14th, marched to Marshall; plenty of wood, water, and forage; road good. Camped at Marshall all night. Distance marched, 15 miles. 15th, broke camp at 5.30 a. m.; marched for Sedalia; road good, plenty of wood and water; forage scarce. Arrived at Sedalia at 3.30 p. m.; distance marched, 35 miles. Whole distance, 109 miles.