There will be some additional information on some of these men. If you see a name of interests and would like to know if there is more information on a name, you can write me and I will help you all I can. My address can be found in my profile. 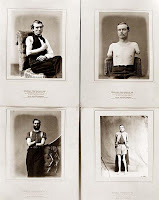 This picture is not shown for it's shock value, but to remind us what price a man in war any war is willing to pay for what he believes in.
This picture can be enlarged by pushing on it.
Report of Lieutenant John H. Hull, One hundred and first U. S, Colored Infantry.

Captain John U. Hiltz, of Company C, and excellent officer, had his right leg amputated.

Captain Allen, of the Twenty-fifth Iowa, who lost a leg in the fighting of the 20th.

Report by JAS. B. McPHERSON, Major-General.

Private Weed, Company F, wounded by musket-ball in fleshy part of the leg.

Sergeant Vansickle, Company H, continued to fight after receiving a wound in the leg.

Corporal William H. Foster, of Company C, were each wounded in the leg

Lieutenant Wallace remaining at his post, though twice wounded in the leg.

Sergt. John Cochran, Company F, seriously wounded in the leg below the knee.

Report of operations of First Division, Eighteenth Army Corps, on 29th and 30th of September, 1864.

Lieutenant-Colonel Rodman was struck first in the side, and then in the left leg.

Colonel B. R. Pierce, Third Michigan, was wounded in the leg, since amputated,

Colonel David Shunk, eighth Indiana, distinguished in all three of the battles; hit in the leg at Vicksburg.

Captain Siler, a gallant officer, was among the wounded, having his leg broken.

Colonel Cruft, of the Thirty-first Indiana, was severely wounded in the leg.

Major Robert H. Stevenson, of the Twenty-fourth Massachusetts, was wounded in the leg

Captain V. P. Parkhurst, of the Twenty-fifth Massachusetts, had his leg fractured.

Private Elijah Wood, of Captain McCowan's company (left leg shot off, but in a fair way to recover).

Captain McQuaide, while cheering on his men, fell from a severe wound in the leg.

GENERAL: Having just returned from Johnson County I write you in order to give you some knowledge of the ill treatment of some of your old friends, outrages committed by the Federal soldiery. After being robbed of all their household, wearing apparel, and subsistence, they are then a subject of search for money. Not being satisfied on searching their persons, they are taken from their beds and placed upon beds of fire and tortured for the purpose of getting money. Aunt Tish (Mrs. Howel) was taken from her bed and burned so severely that there is but little hope of her recovery. All the flesh from below the knee of one leg has dropped off. Mrs. Susan Willis at the same time burned severely on the feet. Mrs. Wiley Harris burned by placing her head in the fire, and then whipped almost lifeless. Mrs. Major-Thompson burned on head, arms, and hands. I must yet tell you that Isbell, my wife, was taken from her bed and placed upon coals of fire, and after being burned severely was made to go in the damp of night some 400 yards to get money, and made to walk a part of the way with her feet all in a crisp, Isbell's mother remaining at the house suffering with like punishment. Notwithstanding these outrages, that of still deeper infamy is now the suffering pangs at heart of some of the helpless ladies of Johnson.
L. N. C. SWAGERTY.
Posted by Dennis Segelquist at 8:02 PM