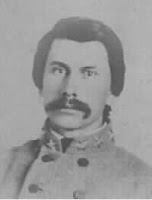 The siege of Vicksburg.