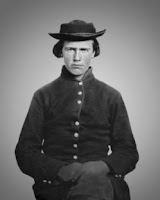 Silas the "eldest" served three years in the Continental Army in the Revolutionary War. "Silas BARDWELL, who had served three years in the struggle for Independence, came to Wysox about 1790, settling on a strip of land adjoining that of John HINMAN and extending to the river. He was a son of Lieutenant Perez BARDWELL (also lived in Wysox a few years) and was born, 1764, at Hatfield, Mass. Soon after the war he removed with his father's family to Ontario county, N.Y., where he remained until coming to Wysox. He had married Lavina ABBOTT. In 1811 during an epidemic of smallpox he was stricken and died, and three days later his wife passed away of the same disease. They left eight children, six sons and two daughters".
After 1853 Silas (Jr.) moved to La Salle Co., Illinois taking Silas Washington and his other children with him.

Silas Washington BARDWELL enlisted in 26th Illinois Infantry in August 1861.
He was wounded November 25, 1863 in Chatanooga, Tenn.
He was MIA in November 1864, found to be captured.
Paroled by Confederate Forces April, 1865.

Kristed, Thanks for your comment. This added info well be of help to those looking into this line.
Your host..

I wonder if he and I are somehow related.