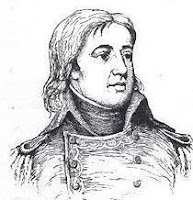 Joshua Barney (6 July 1759 – 1 December 1818) was a commodore in the United States Navy, born in Baltimore, Maryland, who served in the Revolutionary War and the War of 1812. Barney served in the Continental Navy beginning in February 1776, as master’s mate of Hornet where he took part in Commodore Esek Hopkins’s raid on New Providence. Later he served on the Wasp and was promoted to the rank of lieutenant for gallantry in the action between the Wasp and a British brig, the tender Betsey. While serving on Andrea Doria he took a prominent part in the defense of the Delaware River.

Joshua Barney was captured by the British while serving in the Continental Navy. He and his shipmates were kept on board in 3 foot high boxes for 53 days with minimal food and water. Upon arrival in England, he was imprisoned, but escaped with the help of a friendly guard. He returned to the Colonies to captain the privateer Hyder Ally, where he gained fame by tricking the British General Monk. As the two ships drew near, he shouted to the General Monk "Hard-a-port your helm," but had instructed his helmsman to do the opposite. The ships collided as planned, and Hyder Ally lashed her prize alongside.

Four men on the Hyder-Ally were killed and another eleven were wounded. The toll onboard the General Monk was much greater; twenty men were killed, another thirty-three wounded --- every officer on board, save one midshipman, was a casualty.

The merchants of Philadelphia had fitted out the ship "Hyder Ally," 18, and had appointed Lieutenant Joshua Barney of the Continental navy to command her. Proceeding down the Bay, Barney on April 8 made his memorable capture of the "General Monk," 18, Captain Josias Rogers. Both the "Hyder Ally" and the "General Monk" were now taken into the service of the state. The "General Monk," which was renamed the "Washington," was in May, 1782, loaned to Robert Morris, the Continental Agent of Marine, who sent her on a commercial errand to the Westlndies. On the return of the "Washington." Morris purchased her for the service of Congress. The "Hyder Ally" under different commanders cruised for the rest of the year with little success. In December the commissioners obtained permission from the Supreme Executive Council to sell her, and build a vessel of more suitable construction for the defense of the Delaware, for which purpose they were already equipping an armed schooner.

When the " Hyder Ally " was offered for sale, the commissioners bid her in for the state, as the bidders refused to give her full value. The establishment of officers and seamen on board the "Hyder Ally" and the "Washington" was a new one. On February 13, 1781, the officers and seamen of the first establishment were all discharged, except Captain Boys and certain disabled seamen; and on December 20 Boys was dismissed, since the service in which he was engaged was at an end.

When peace was declared in the spring of 1783, a few men were probably in naval employ under the new establishment. That the state still owned a few small vessels is certain. On April 10, 1783, the Supreme Executive Council endorsed a letter from the commissioners saying "that as no doubt appears to remain that Hostilities are ceased, we conceive it our Duty to request your permission to dispose of the Armed vessels under our direction belonging to the State, in order to enable us to close our accounts with the Public.