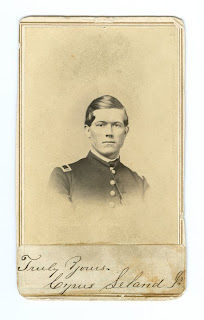 Numbers 8. Report of Lieutenant Cyrus Leland, jr., Tenth Kansas Infantry.
KANSAS CITY, MO., August 31, 1863.
GENERAL: I have the honor to report the part taken by myself, and what I know of the late Quantrill raid.


I joined Major [P. B.] Plumb, at Olathe, Kans., about sunrise on the morning of the 21st instant. He had about 50 men. We started out on the road to gardner, but soon learned that Quantrill had passed through Gardner the evening previous, in the direction of Lawrence. We then struck across the country direct for Lawrence. When nearly 3 miles north of Gardner, we found Quantrill's trail, and learned that Captain [C. F.] Coleman, of the Ninth Kansas, was but 4 or 5 miles ahead of us. Major Plumb knew before this that Captain Coleman was ahead of us, and that he was on the trail. We overtook Captain Coleman about 4 miles southeast of Franklin about 9 a. m. Long before this we could see the smoke over the city of Lawrence. Here we moved in a southwesterly direction. We had gone but a short distance when we could see the smoke and dust non the Lawrence and Fort Scott road.
Then we knew about where the enemy were. As we moved along we could see the dust and fresh smoke, and could see by this which way they were moving. Along here I asked Major Plumb to give me charge of the militia (the citizens that had and would join us). He did so. near Brooklyn we made a halt of a few minutes; I suppose it was to find out where the enemy were. While here, a good many of the citizens joined us, and I formed them into companies. I assigned about 50 to a company; had enough to form three companies. Near here we had a skirmish with the enemy; this was about 11 a. m.; the cavalry doing about all of it. Just before this skirmish, general Lane joined us with about 30 men.

After this skirmish, major Plumb ordered me to take the advance with all the militia that I could get. At the first skirmish all the militia, with the exception of one company, broke ranks, some to go farther in the advance, while others would keep away in the rear. I took the advance with the militia; had from 50 to 200 men, but they were strung out in squads back to our cavalry. There were from 20 to 50 of the militia that would fight very well. Whenever we would press up pretty close and commence firing on the enemy, they would halt and form line of battle, and fight us until our cavalry would come in sight, or come pretty near their range, when they would commence their retreat again. Our cavalry horses were very much worn out, and could not catch up with the advance militia. During the day after the first skirmish, our cavalry, with the exception of one company of the Ninth Kansas, was from 1 to 3 miles in our rear.
This company of the Ninth succeeded near sundown in getting near enough to give the enemy a few shots. Along in the afternoon, Major Plumb came up in the advance. He told me that the cavalry horses were completely tired out. The rest of the day Major Plumb was in the advance with the militia, or with this company of the Ninth Kansas, which was then from a quarter to a half of a mile in rear of the advance militia. Just about dark I was in advance with about 40 of the militia. We had just driven the rear guard of the enemy over the brow of a hill when we heard yelling just over this hill. Soon we saw the enemy come up on the hill. They were in line, I think, about 200 strong. They came charging down upon us. We fell back to this company of cavalry. They formed in line as they sa us coming back. We formed on their right. The enemy came up near enough to fire a few shots, when they commenced to retreat again. This was within 2 or 3 miles of Paola, right west of it. It was soon so dark that we lost them. We went into Paola. Reached Paola about 8 o'clock. Found Colonel [C. S.] Clark there. He soon sent out scouts to find Quantrill's trail.
Some time during the night they found the trail. Colonel Clark said that he would start out at 3 o'clock in the morning with all the force that he could get. I staid with Major Plumb Friday night at Paola. Saturday morning we started on the trail with a few citizens. Near the line we fell in with Majors [W. C.] Ransom and [L. K.] Thacher; they had three companies of cavalry. At Williams' place, some 12 miles in Missouri, we found Colonel Clark. We stopped and fled here. Before we left Williams', Major Phillips came in with a command. Here the command separated. Majors Plumb, Ransom, and Thacher, with their companies, started out in a northeast direction; I kept with them. They scouted the country as they moved. Sunday we scouted country in toward Lone Jack. Twice we fell in with some Missouri troops. They were scouting the country in every direction. Sunday night we reached Lone Jack, and sent out detachments to guard all the crossings.
We could see by the enemy's trail that they had disbanded, nearly all of them leaving the direct trail. Monday we scouted the Sni Bottom. Tuesday morning I left Majors Plumb and Thacher near Blue Springs, and came into Independence with Major Ransom, with one company of cavalry. I came into Kansas City in the afternoon with 6 or 8 scouts. Through the whole of the expedition I do not know of any of our command being killed or wounded. In the chase from Brooklyn to Paola we killed 4 of Quantrill's gang. They were left where they were killed. During the chase in Missouri we killed several men, but I do not know just what number. 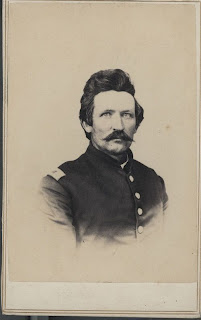 SIR: On the night of the 20th, at 8 p. m., I received a dispatch from Captain [J. A.] Pike, commanding at Aubrey, stating that he had just received reliable information that Quantrill with 700 men was in camp on the head of Grand River, 8 miles east of that place. I immediately sent a messenger to Westport and Kansas City with a dispatch stating the facts as I received them. In about fifteen minutes afterward, I received the second dispatch from Captain Pike, stating that Quantrill had passed into Kansas 5 miles south of Aubrey, with 800 men. The second messenger was immediately sent to Westport and Kansas City with the above news, also one to Olathe, with the request that the word be carried on west.
At 9 o'clock I started with all my available force, consisting of a detachment of Company M, Fifth Kansas Volunteer Cavalry, and a part of my own company, in all about 80 men. At Aubrey I was joined by Captain Pike, Company K, Ninth Kansas Volunteer Cavalry, and Company D, Eleventh Kansas Volunteers Cavalry. My force then consisted of about 180 men. From Aubrey I sent a dispatch to Lieutenant-Colonel [C. S.] Clark, commanding at Coldwater, that at 11 o'clock I would start after them. I struck their trail 5 miles south of Aubrey, followed it some 3 miles, when we lost it, they having scattered and divided their force to prevent pursuit int the night (in again finding it, I lost near two hours).

At Gardner I learned that they passed through six hours before. From Gardner I sent runners south and west to notify the inhabitants that Quantrill had gone north with a large force. I soon could see the smoke from the burning of Lawrence, and pressed on as fast as our jaded horses would their. When about 6 miles south of Lawrence, I was relieved from command by the arrival of Major [P. B.] Plumb, Eleventh Kansas Volunteer Cavalry, with about 30 men. From there we turned south for Baldwin City, and, when neat there, saw them burning Brooklyn.

We halted there a short time to hear from our scouts which way they were moving, who reported that they were on the Fort Scott road, moving south. From Baldwin City we struck southwest, and intercepted them on the Fort Scott road, and engaged their rear with what men we could bet up, we having made a charge for the last 3 miles, and the most of our horses being totally given out, having traveled them upward of 30 miles without feed, water, or rest. After a few rounds their rear gave way and joined their main command. We then divided our command and attempted to cut them off from the crossing of Ottawa Creek, but failed on account of the jaded condition of our horses.

We then got together about 40 soldiers and the same number of citizens (all the rest of the horses having given out), and again attacked them in the rear, and kept up a running fight for the next 18 miles, and till we drove them into the Bull Creek timber west of Paola. Night coming on, we abandoned the chase, having been in our saddles twenty-four hours without food or water for man or horse, and having traveled over 100 miles. The enemy here took around Paola on the north. From the best information received during the day, we killed and wounded about 30 of them. We rested at Paola during the night, and in the morning Lieutenant-Colonel Clark took command and resumed the chase.