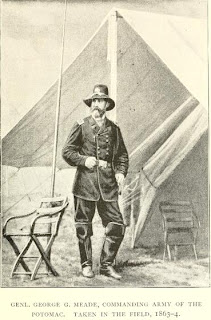 Birth: Dec. 31, 1815
Death: Nov. 6, 1872
Civil War Union Major General. Known universally for being the victor of the Battle of Gettysburg. Graduated from the USMA in 1835, placing 19th of 56. Left army in 1836, and returned in 1842 as a second lieutenant in the Corps of Topographical Engineers. Employed as a military engineer up to and including the Mexican War, where he was present at Palo Alto, Resaca de la Palma, and Monterrey. Promoted to Brigadier General, US Volunteers on August 31, 1861 a few months after the start of the Civil War. Commanded a brigade of Pennsylvania Reserve troops on the Peninsula and during the Seven Days battles. Severely wounded at the Battle of Glendale. Commanded the brigade at the Battle of Second Bull Run after partially recovering. Elevated to Division commander, he commanded the I Corps's 3rd Division at the Battles of South Mountain, Antietam and Fredericksburg, where his troops made a temporary breakthrough of the Confederate lines.
Named commander of the Army of the Potomac's V Corps a few days after the battle, and was promote to Major General. Led his Corps at the Battle of Chancellorsville, where he successfully executed the secret and strategic crossing of the Rappahannock River, only to have his efforts squandered by General Joseph Hooker's timidity. Replaced Hooker as commander of the Army of the Potomac on June 28, 1863. Just a few days later, the Army of the Potomac was involved in the monumental Battle of Gettysburg. General Meade arrived on the scene the night of July 1st, and made the critical decision to stay and continue the fight. The Confederate forces were subsequently defeated after two more days.

The Battle of Gettysburg has been argued to be the turning point of the Civil War. General Meade himself was roundly criticized then and now for not pursuing the defeated Confederate forces after the battle. Matching his stellar war record was his famous horse "Old Baldy." This many-times wounded Warhorse carried the General faithfully through some of the bloodiest battlefields of the Civil War. The only further significant independent command decisions for the Army of the Potomac made by General Meade was the aborted Mine Run Campaign in the fall of 1863. When Ulysses S. Grant named Lieutenant General and commander of all US forces, he joined with the Army of the Potomac, and directed Army strategy and operations against Robert E. Lee.
General Meade nominally retained command of the Army, although strategic decisions were made by Grant. He led the Army in all of the battles from the Wilderness right up until Appomattox. He received the Thanks of Congress for his Gettysburg efforts, and ended the war as Major General in the Regular Army. He died while in active duty command of the Military Division of the Atlantic. His son, George Jr., served as his aide during the Battle of Gettysburg.

Cause of death: Pneumonia.