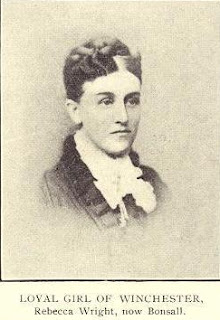 Rebecca McPherson, a Union spy during the Civil War, was born near Winchester, Virginia, in January, 1842. Her family was one of the few in Winchester who supported the Union. Her father, Amos Wright, died in a Confederate prison early in the war. Rebecca was a schoolteacher, and due to her Quaker beliefs, she abhorred slavery.

In August 1864, Confederate General Jubal Early's army occupied Winchester. While trying to discover the troop strength of Early's army, Federal scouts came across Thomas Laws, an elderly slave, at his home. When Laws told them that he had a permit to pass through the Confederate lines three times a week to sell vegetables, the scouts enlisted his help.  Next, they needed a reliable contact in Winchester. Rebecca Wright's name was suggested by General George Crook, who had visited her boarding house a number of times and trusted her loyalty to the Union.

One afternoon, Rebecca answered a knock at her door to find Thomas Laws on her doorstep. He said he needed to speak with her immediately, and she invited him in. He removed a piece of tin foil from his mouth and handed it to her. Inside the foil, there was a message written on a piece of tissue paper:

Ms. Wright, I know that you are a loyal lady and still love the old flag. Can you inform me of the position of Early's forces, the number of divisions in his army, and the strength of all or any of them and his probable or reported intentions. Have any more troops arrived from Richmond, or are any more coming, or reported to be coming?  The note was signed by General Philip Sheridan of the Union Army.

Rebecca hesitated. If the Rebels discovered that she had given information to Sheridan, she might be imprisoned or put to death. But she remembered a conversation she had with a wounded Confederate officer a few days earlier, and felt compelled to provide that information to the Yankees. She asked Sheridan to keep her involvement a secret until after the Civil War.

She wrote this note to General Sheridan:

The division of General Kershaw and Cutshaw's artillery have been sent away, and no more are expected to arrive as they cannot be spared from Richmond. I do not know how they are situated. I will take pleasure hereafter of learning all I can of their strength and position, and the bearer may call again.
Laws carried this vital news back through the lines. This meant that a full division of General Early's army had been sent to fortify General Robert E. Lee's forces at Petersburg, Virginia. Based on this information, Sheridan planned his attack on Winchester.

Many times during the next day, and the quiet Sabbath that followed, I wondered what had become of the messenger, and what would result from my note.
The answer to that question came on the morning of September 19, 1864, when she was awakened by the booming of cannon.

The Yankees drove Early's army from Winchester, clearing the way for General Sheridan's destruction of farms and crops in the Shenandoah Valley, which rivaled the devastation of General William Tecumseh Sherman's contemporaneous March to the Sea in Georgia.  After the war, Sheridan sent Wright a gold watch, chain and breast pin, which was made to his order. "I will always remember this courageous and patriotic action of yours with gratitude," Sheridan wrote.

It was discovered that Rebecca supplied the information that helped the Union army drive the Rebels from Winchester, and she was hated in her hometown after the Civil War. She left Winchester, and General Sheridan helped her get a job in the United States Treasury Department, where she worked for the next 47 years, retiring in 1914.

Up to the year 1891, the colored man that carried the dispacth, had not been found, although every effort had been made to find him.  That year the survivors of the sixth corps, dedicated a monument at Winchester to General David A. Russell, who was killed in that action and while there started a search to find the missing colored man.  He was found and prover to be Tom Lewis of Berryville, who in 1864, belonged to a Mr. Clarke who resided in Winchester and who was privileged to go into town twice a week with produce from his master's farm.  He was brought to to Washington and was finally ---by Mrs. Bonsall ( Miss Wright ), who took him to the War Department and took affidavit of identity which is now on file.  At this time the faithful messenger was 78 years of age, never lived in a city, and while a position was offered him for the balance of his live, he refused, as he was then living with his Grandchildren and doing well and is contented
Posted by Dennis Segelquist at 2:56 PM