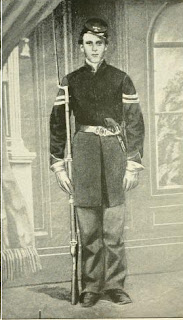 The following comes from the regimental History of the 124th., Ohio Infantry..

I saw the first man of your regiment killed, Corporal Atkins.  He was a tall, finely formed man, a farmer and school teacher by occupation; an abolitionist, he hated slavery, and consequently the slaveholders rebellion; and many a time around mirthful campfire had he been the object of his fiery sentiments of his hatred of that giant wrong; and some times it was hinted in his hearing " The best fighters are not as a rule the best talkers."  I can see him now as he stands at my right behind the sheltering trunk of a large pine loading and firing , in the storm of bullets as calmly as though not at death's carnival.

I saw blood flowing from his left shoulder, I say, "William, you are badly wounded; go to the rear." Putting his hand up to his wounded shoulder, and extending his left arm says, "See Captain I am not much hurt, I want to give them another."  He draws another cartridge from his box, springs his hammer, runs the cartridge half way down a bullet from the enemy pierces that brave heart, and I see him fall on his face dead.
Posted by Dennis Segelquist at 1:42 AM