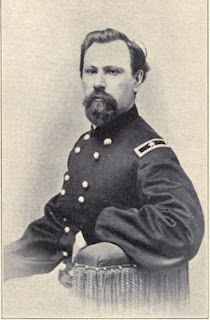 Civil War Union Brevet Brigadier General. Served in the Civil War first as Lieutenant Colonel of the 6th Wisconsin Volunteer Infantry (which was part of the famed Iron Brigade), then as Colonel and commander of the 21st Wisconsin Volunteer Infantry, which he helped raise. At the October 8, 1862 Battle of Perryville, Kentucky, he rose from an ambulance, sick from malaria, and led his unit until he was severely wounded. Upon his recovery he was made Colonel and commander of the 8th Veterans Reserve Corps, and was appointed as commander of the Camp Douglas Military Prison in Chicago, Illinois. While commander, he oversaw the internment of over 10,000 Confederate prisoners. His tenure in command was marked by a zealous enaction of punative measures endorsed by higher Union authorities. His measures resulted in the deaths of over 5,000 rebel prisoners. He was brevetted Brigadier General, US Volunteers on December 20, 1864. After the war he served as Deputy United States Commissioner of Internal Revenue from 1872 to until his death in Washington DC in 1874.