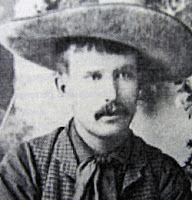 George A. "Bud" Frazer, was a Texas sheriff, Bud Frazer, had more trouble with his deputy, Jim Miller, then with criminals.  Born in 1864, the son of a judge, Frazer became a Texas Ranger in 1880.  In 1890, he was elected Reeves county sheriff.  He fired Deputy Miller for stealing a pair of mules from a Mexxican prisoner whom Miller had shot to death, allegedly for resisting arrest.  Miller was charged, and though subsequently released, he fostered ill will which would surround the two men for the following six years.  Miller opposed Frazer for the office of sheriff in 1892 and was defeated but managed to be appointed city marshall of Pecos.

On April 12, 1894, Frazer shot Miller in the right arm in front of a Pecos hotel.  Miller returned fire, but succeeded only in wounding an innocent bystander.  Frazer then shot Miller repeatedly in the chest and left him for dead.  Miller, however, survived.  In November 1894, Frazer lost his bid for reelection and left Texas to operate a stable in New Mexico.  Returning to Pecos on December 26, 1894 to complete his move, Frazerencountered Miller for the second time, and shot him in the arm and leg.  This time Frazer was arrested for attempted murder and jailed.  He was acquitted in May 1896.  He completed the move to New Mexico, but on September 14, 1896, returned to Toyah, Texas, to visit his mother and sister, where he once again encountered Miller.  This time, Miller shot first, killing Frazer with a shotgun blast to the face.
Posted by Dennis Segelquist at 4:18 PM