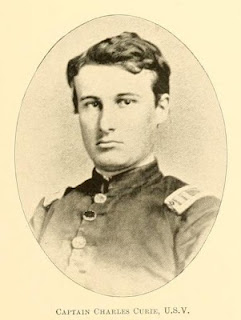 Charles Curie (sometimes spelled Currie) was born on October 20th, 1842, at Audencourt, near Montbeliard, France, and immigrated to the United States in 1844, residing in Patterson, New Jersey. He moved to Cleveland, Ohio, living there from 1856 to 1859 before returning to New Jersey, where he attended the Bryant & Stratton's Commercial College. He was employed for a time as a Custom house Clerk at Ad. Koop & Sattler in New York City, New York.

With the secession of the Southern States and the firing on Fort Sumter he enlisted on April 23rd, 1861, at New York City, New York, for two years service, at the age of 19, and was mustered into service as a Private in Company C of the 9th New York Volunteer Infantry Regiment, Hawkins Zouaves, on May 4th, 1861. He was promoted to the rank of Corporal on March 5th, 1862, and was wounded in action on September 17th, 1862, at Sharpsburg, Maryland. While at home recovering he was discharged to accept a commission in another regiment on February 13th, 1863, and was enrolled and mustered into service as a First Lieutenant in the Second Regiment, Hawkins Zouaves, on that date, at Albany, New York, for three years service, however with this organization failing to complete its organization he was discharged on June 22nd, 1863.

He once again enrolled and was mustered into service as the First Lieutenant of Company C of the 178th New York Volunteer Infantry Regiment on June 23rd, 1863, for three years service, being transferred to Company K on March 8th, 1864. He served as the Acting Ordnance Officer and Aide-de-Camp for the Third Brigade, Third Division, of the 16th Army Corps in 1864, and was promoted to Captain of Company A on September 30th, 1864. As a result of illness he was discharged after tendering his resignation on December 20th, 1864.  Upon returning home he attended the New York University Law School in New York, and upon graduation was admitted to the New York State bar, and opened a practice.

He organized and was elected Captain of the "Patterson Light Guard" in the New Jersey National Guard in 1879, and joined the New York Commandery of the Military Order of the Loyal Legion of the United States on February 3rd, 1886, in addition to serving as the Commander of the Department of New Jersey, Grand Army of the Republic, in 1905. From 1908 to 1909 he served as the President of the Society of the Army of the Potomac.  Captain Curie died at his home in New York City, New York, on May 9th, 1910, at the age of 68.

"He was one of the squarest, fairest, and sweetest comrades thatever bore arms." – General Henry C. Dwight.