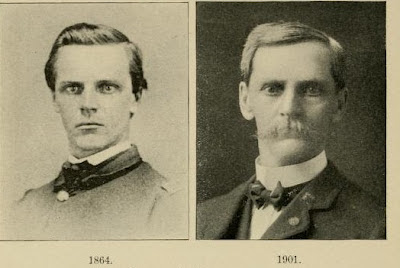 By Lieutenant E. R. Havens.
On the night of the 2Sth of May I was Sergeant of the Camp Guard, or picket around our camp, which, together with the First Vermont Cavalry, and a portion if not all of the 18th Pennsylvania Cavalary, we occupied at the bridge over Kettle Run, on the Orange & Alexandria Railroad, about two miles north of Warrenton Junction. My relief went on duty at twilight. When I had posted my last picket in the road at the west of the railroad and north of the camp, and was on my way to the reserve I heard a shot from the picket last posted.  The names of the men on picket were: James Barber, Zeph.  Wisner, and Henry or "Hank" Allen, all of Co. "A." I hastened to Barber's post to ascertain the cause of the firing, and was informed that two men on horseback had approached him, and on being hailed had ridden away to the left without halting and thinking their actions suspicious he fired at them as they rode away.
His story was but just told when from Wisners post another shot was fired. His story was identical with Barber's, and was scarcely told when Allen's Burnside rang out on the night air. Hastening to his post, the same story was repeated, with the addition that as he fired his horse wheeled and started to run. but that he had soon brought it under control, and that as he returned to his post he saw one horse galloping away without a rider, while the rider on the other horse seemed to be holding his comrade across his saddle and both srettinsf away. By this time it had become too dark to discern the tracks of horses or to satisfy myself that the dismounted rider has been wounded, as might have been indicated by discovering blood on the ground.
During the remainder of my tour of duty that night I did not lack for excitement or work, as it kept me in the saddle almost the entire time riding from one post to another to ascertain the causes for the many shots that were fired. About 1 o'clock next morning I was relieved by the other Sergeant at the reserve,  he was ordered to take eight men and patrol the railroad in the direction of Warrenton junction, as far as the woods, a distance of about one mile. These woods, you will remember, extended north from near the Junction, half a mile or more, and acted as a screen for Mosby's attacks more than once during our acquaintance with that section of the "Old Dominion." I relieved the other Sergeant the next morning and posted the same relief that I had the night before just as a train loaded with supplies reached our station from Washington.
On my way back to the reserve I halted at Allen's post, and was inspecting the ground trying to discover traces of his visitors of the evening before, when the train started on for the stations south of us. I was watching it as it neared the woods above referred to, and saw the locomotive as it swerved from a direct course on striking a misplaced rail, and also saw the smoke and heard the report from the little cannon by which the engine was disabled, and the skirmish before the firing of the train, and the retreat of the guerrillas.  Immediately the camp was in preparation for the pursuit, permission to join the same being refused me because of the duty on which I was then engaged, so that I cannot describe the pursuit, or the battle that followed upon their overtaking the guerrillas that resulted in the dispersion of the band for the time being, with the capture of the cannon and several prisoners.  Among the prisoners taken, and who was at the time acting as cannonier, was a Louisianian named Montjoy, who was credited with a reputation as spy, scout, desperado, and an all round bad man.

Scouting parties sent out that day captured other prisoners, so that we had under guard that night about thirty. The day following I was ordered to take a detail of several men from my Company and directed to report to Regimental headquarters for orders. On reporting I was directed to relieve the guard over the prisoners, and on arrival of the train for Washington, to remove the prisoners from the guard house to the train and escort them to Fairfax Court House, and turn them over to the Provost Marshal, and I was especially commanded to pay the strictest attention to the aforesaid Montjoy and to certainly
deliver him at the Provost Marshal's headquarters, dead or alive.

I did not fear an escape of any of the prisoners by daylight, but as the afternoon wore away I feared that night would overtake us before we could reach the Court House, as the three miles or more between the Station and the Court House must be made on foot, and I remembered one especially bad spot in the road where it passed through quite a deep cut, the sides and top of which were shaded by a heavy growth of  timber, and you will all remember the darkness in that country at that season of the year was something impressive as well as oppressive, and it was at that point that I feared an attempt to escape would be made if made at all.

Now I was young in military experience and felt the importance of the responsible position I was then occupying*. As it became dark I almost wished I was home, when I, picturing the desperate struggle that Montjoy would likely make to regain his freedom, and I could almost see myself a corpse by the roadside. But there was no way out of it and I was bound to make a bold face and bluff it out. As we neared the fateful spot I passed the word to my men in whispers, assigning to each his post in front or at the sides of the column, retaining as my bodyguards two in whom I had confidence as to their courage and deyotion to duty, if not to myself, and placing the dreaded Mont joy in the rear of the column I took up my station by his side with my two guards.
As we marched along the question came into my mind, what shall I do with my revolver, the only weapon that I carried. I first thought that I would carry it in my hand, cocked, and ready for action at the first move made by my prisoner to esape ; then I argued that if I did and he happened to want a revolver, he could get mine easier than he could stop to buy one, as I would be no match for him in a physical contest, and that if I tried to shoot him I would be just as apt to shoot someone else, but if I carried it securely fastened in its holster he could not get it so easily, and I would not be so apt to kill some of my own men ; so buttoning up my holster we marched along through the darkness, my nerves strained to the highest pitch and ready to break at every sound that was not clearly made by our marching feet. Never did anything look brighter to me than the lighter shadows of the night as we came out into more open country at the top of the hill without the loss of a prisoner or a life.

The remainder of  the march was without incident. I had found Captain Montjoy a very unassuming and sociable companion, and would enjoy meeting him to talk over the events of that clay and night and laugh with him over the terrible fright he gave me.  On returning to camp next day, after dismissing my command, I repaired to headquarters to make my report and deliver the receipt of the Provost Marshal for the prisoners placed in my care, and expecting to receive a "Well done, good and faithful servant," but Oh, what a fall was there! I was met by the Lieutenant-Colonel who, upon learning that I had taken away the prisoners the clay before, demanded to know why I did not kill him ; why I did not let somebody else kill him, etc.
I finally found out that some unregenerate "Mushrat" without the fear of that lake which is said to be the "Portion of all liars'' before him, had circulated the story that while transferring the prisoners from the guard house to the train the dreaded Mont joy had attacked me, and tried to get my pistol; that he had me down on the ground and nearly dead before he could be overpowered, and that when one of my men had attempted to shoot him I had forbidden it, all of which had caused the good Colonel to feel very wroth towards the said Montjoy, and correspondingly so towards your humble servant.
Posted by Dennis Segelquist at 10:06 AM