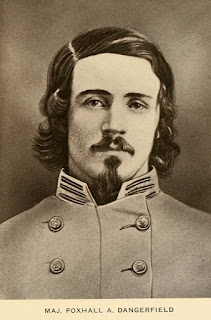 Foxhall A. Dangerfield was born in Rockingham county, Virginia, at "Westwood," February 8th, 1839. He was descended from distinguished colonial ancestors, his father and mother being cousins, were both grandchildren of Richard Parker, Judge of the General Court of the Colony of Virginia, and later of the Supreme Court of Appeals of Virginia.

He was the youngest son of eleven children, and removed with his parents to Bath county at an early age ; was educated in most part at the semi-military school of George P. Terrill and at Lewisburg Academy, studied law in the office of his brother-in-law in California, from which State he returned home to defend his native State in the John Brown raid. Later he studied at the law school now Washingon and Lee University.

In 1861 the law class disbanded, and after taking his legal examination at Staunton, he joined the cavalry company commanded by Capl. A. T. Richards of Bath county, and in 1862. at the reorganization, was elected captain of that company, which was soon after transferred to Ashby's command, as a company of the Seventeenth Battalion, which afterwards was merged into the Eleventh Virginia Cavalry.

Captain Dangerfield participated in all the engagements of his regiment except when absent from wounds or imprisonments. He was wounded at Orange Court House August 2nd. 1862. receiving a severe sabre wound and taken prisoner to the Old Capitol, Washington. Being soon exchanged, and before his wound was healed, he was again in command of his company.