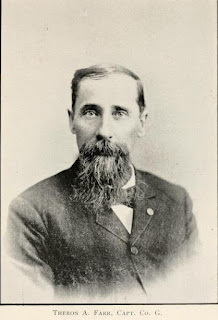 One of the men who well represented the character of the regiment was Theron A. Farr of Littleton. He was strong of physique, cool and intrepid in danger, not seeking hazards, but manfully meeting his duty, whatever the sendee to which it called him, quiet and unostentatious in demeanor, without reproach in habit and character, and faithful to the end. It was because the backbone of the organization was made up of such men that the Fifth New Hampshire Infantry was able to make a record in the War of the Rebellion which will give it a rank among the famous fighting regiments of the world.

Theron A. Farr was a farmer in Littleton at the breaking out of the war. His parents were Gilman and Philena A. Farr. He was born at that place, Dec. 29, 1839, and there he has always resided. His wife is a daughter of the late Marquis L. Goold, a prominent citizen of Littleton. They have two promising sons, Walter H., and Henry M. Mr. Farr's first enlistment was April 23, 1861, and for three months. Under this enlistment he remained some time at Portsmouth and its vicinity in various lines of duty. Without being sent out of the state, he was discharged with a large number of his comrades, who were not re-enlisted into the Second Regiment. Sept. 30, 1861, he enlisted as a private in the Fifth, and reenlisted as a veteran March 20, 1864, having then the rank of sergeant. Nov. 4, 1864, he was commissioned lieutenant, and Ma} r 1, 1865, was commissioned captain, but was mustered out June 29, as lieutenant. He won his promotion by hard work and faithful service. His abilities were not of the flashy kind but solid, like the granite among which his kindred have for generations dwelt, delved and built that good name which is better than riches. Capt. Farr is a wellpreserved man in the prime of a well ordered life, a useful citizen in community, and trusted among men of affairs and in official stations.
Posted by Dennis Segelquist at 5:28 PM