There is another class that deserves honorable mention. The colored cooks in the army were an important adjunct. Many an officer was enabled to devote his hours off duty to studying "Hardee's Tactics," and was also enabled to keep his uniform in presentable condition, by the aid of a cook, and many a hot, tired and hungry soldier, returning to camp from drill, near noon, was regaled by the rich odors arising from the steaming camp kettle, which his cook, furnished him by a doting father, had filled with tempting viands. And many a sick or wounded Confederate has been tenderly waited upon and cared for by the negro who played with him in boyhood and now tried to do for "young massa" what "ole missus" would have done, but was too far away to do. 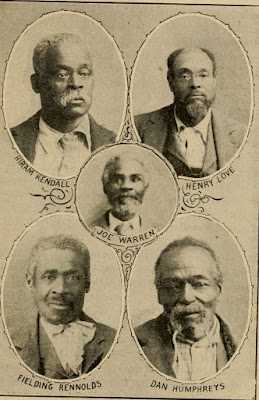 Push to enlarge.
Posted by Dennis Segelquist at 9:51 PM