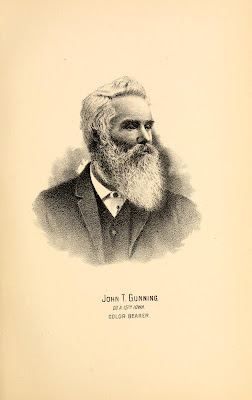 Authors note.  I took this information and picture from a book on the History of the 15th., Iowa.  While a lot of the men were giving a large write up John was just given a short note, why I have no idea.  John was in the 15th., Iowa Infantry, Company A.,  He stared out as a Privaate and came up the ranks, was one of the companies color bearers.  If one was to  look up information on him, you would need to look under John T., John F., as he is recorded under both.  Pension roll No. 118-408, Roll says he was living in Cedar Rapids, states he had a gun shot to his right side, was given $6, per month.    If any one can add to his information I would be glad to have it.

Posted by Dennis Segelquist at 12:30 PM