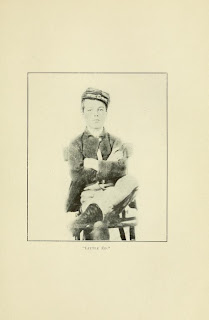 Captain Peter Wise and the men of Company I., permitted this boy to with them, and at Bladensburg, Md., captain Wise secured a horse for him, in the engagement at Hanover, Pa., June30, 1863, his horse was shot under him in the charge, in which he participated, but he escaped unharmed, another horse was provided for him.

He always took pride in keeping his uniform clean and neat, which the officers and men procured for hm.  By his intelligence, trustworthines, geniality, and courage, he endeared himself to every officer and man in the regiment; he was ready and willing to undertake any task military or otherwise, however hazardous, that he thought would be of benefit to the union cause, or for the advantage of the 18th., Pennsylvania Cavalry.

Lieutenant Colonel W. P. Brinton, who command the regiment a large portion of the time, in the campaigns of 1863 and 1864,became very much attached to this boy, and on several occasions and positions of the enemywhich could not have beenprocured by any soldier.  The incident related by General James H. Wilson, which occurred at Opeguan, Va., ( Winchester ), September 14, 1864, shows the corage of this boy, as well as his devotion to Colonel Brinton.

"Little Ed", was with the regiment from it's organization and until it's muster out October, 1865, except for a short time when he was captured by the enemy, from whom he escaped, and returned to the regimentin a short time.  The three years of outdoor life developed our boy phygically, and at the muster out of the regiment, was a good size and rugged boy for one of his age.

There was an effort made by the officers and menof the regiment at Cumbealand, Md., when the regiment was discharged to get the boys name on the muster-out-rolls, so that he might obtain an honorable discharge, and get some pay for the three years service he had rendered, but the attempt failed, and Edward F. Parker served three years, faithfully, courageously and honorably as man can, without pay or reward.
Posted by Dennis Segelquist at 11:21 AM