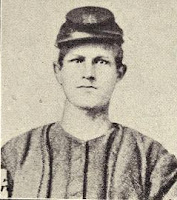 Anthony Schaffer was born on November 12th 1841 in Ireland. As a young boy he and his family moved to New Jersey. At the outbreak of the Civil War Anthony enlisted in the 23rd Pennsylvania, "Birney's Zouaves". He was mustered in at the Skuykill Arsenal on August 10th 1861 and placed into Company H, the Color Company. He served throughout the Peninsula Campaign of 62' and Fredericksburg in late December. On May 1st 1863, two days before being engaged at 2nd Fredericksburg, he was promoted to Corporal of Company H. At the Battle of Gettysburg (July 3rd 1863) , Culp's Hill, two men from each Company, (Anthony being one of them from Co. H) were chosen as Skirmishers. He was struck in the left arm and wounded. He was taken to The Michael Trostle Farmhouse which was the Sixth Corps Hospital which was under the direction of Dr. Chamberlain (U.S. Vols.) and Dr. Oakley (2nd NJ). After a brief furlough he returned to the unit and fought with them during the Mine Run Campaign in Virginia. In December (63) the unit was transferred West to Johnson's Island, Sandusky OH to guard Confederate Prisoners .

In the spring of 64 The Regiment returned to The Peninsula again and joined up with The Army of the Potomac during U.S. Grant's Overland Campaign. At the Battle of Cold Harbor on June 1st 1864 Anthony Schaffer was shot in the neck and back and carried from the field. He spent the next three months in a Hospital before being mustered out with the Regiment on September 8th 1864, his three year enlistment running out. He returned home to New Jersey after the War. Anthony died on March 8th 1876 as a result of his wounds from Cold Harbor.