Captain Stephen BarlowEspy, of company G.  Then The Brigade Commissary on the staff of General Whitaker, and seving as volunteer Aid-de-camp during the battle, received a fatal shot while courageously riding along the lines, carring orders and urging the troops forward.
Captain, Espy had been acting Bridade Commissary, but had been ordered to return to his company; he know a great battle was expected, and asked that the change be deferred tillafter the battle, saying to the Lieutenant, "What the company is you have made it, and I do not want to come now and take all the chances of honor from you."  His conduct in the battle was worthy the highest honor.  Remaining on the staff, he fell while carring an order from General Whitaker to Colonel Moore.
Stephen Barlow Espy.
Biogaphy. 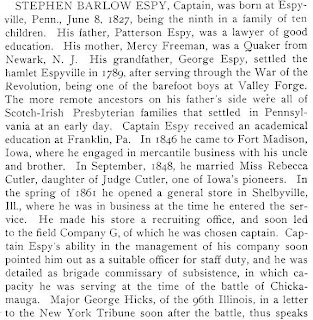 ﻿By pushing on any of the pictures you can enlarge them.
Posted by Dennis Segelquist at 3:49 PM