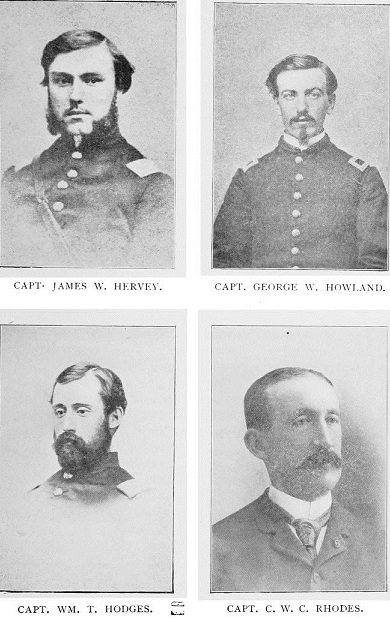 CAPTAIN JAMES W. HERVEY.
Captain J. W. Hervey was born in New Bedford, Mass., February 2, 1838. He was educated in the schools of his native city. Passing through the grammar and high school, he fitted for college at the Friends' Academy, and in 1856 entered Yale, where he remained until 1860.  Before he went to the war, he was employed in the Mechanics Bank, and was a member of the Home Guard during the first year of the war.  Enlisting as a private in Company A of the Forty-first Massachusetts Infantry Volunteers, August 23, 1862, he was mustered as First Lieutenant, August 31, 1862;
commissioned Captain, February 8, 1863, and was honorably discharged March 5, 1864, on surgeon's certificate of disability. Captain Hervey was seriously injured while on picket in Louisiana.  After the war, he held a position in the Mechanics National Bank, for many years. He is now agent for the Northwestern Mutual Life Insurance Company of Milwaukee, Wis.

CAPTAIN GEORGE H. HOWLAND.
Captain Howland came from New Bedford to camp at Lynnfield as First Sergeant of Company A. When Captain Vinal was promoted, Howland became Second Lieutenant, and served well as a commissioned officer.  He was afterward made First Lieutenant. At Port Hudson he was injured badly by a falling building. September 2nd, 1864, he was made Captain. He was in the battle of the Opequon, and was shot through the thigh. He left the regiment, returned home, and died from the wound a few months later.
WILLIAM T.  HODGES
WILLIAM T. HODGES, Roxbury, 29, s ; banker. 1st Lieut. Sept. 10, '62.  Disch. as 1st Lieut, and commissioned Capt. 4th Cav. Aug. 13, 63.
CAPTAIN CHAS. WM. CLAPP RHOADES.
Note Also spelled Rhodes.
Captain Rhoades was born at Boston, Mass., March 31, 1839. He was mustered into the United States service as a private in Company D, First Regiment, Massachusetts Volunteer Infantry, for three years. May 24, 1861; was on detached service in United States Signal Corps, Army of the Potomac, from 1861 to October, 1862 ; promoted Second Lieutenant, Forty-First Massachusetts Volunteer Infantry, and commissioned Sept i6th, 1862; promoted First Lieutenant of the same regiment, commissioned October 7, 1862.

On account of continuous service he was promoted Captain, Third Mass. Volunteer Cavalry, commissioned March 6th, 1864; was on staff of General Cuvier Grover commanding Second Division Nineteenth Army Corps, as Acting Engineer and Provost Marshal, frorii August, 1863, to December, 1864, and was mustered out at Boston, December 6, 1864, on account of expiration of term of service of Third Company Unattached (Company M), Third Massachusetts Volunteer Cavalry, of which he was Captain. He was afterward commissioned as Second Lieutenant First Massachusetts Battalion Frontier Cavalry, December 27, 1864; was commissioned as Captain First Massachusetts Battalion Frontier Cavalry, December 30, 1864. Captain Rhoades was mustered out of  United States service at the close of the war at Read, ville, Mass., June 30, 1865.

Captain Rhoades left Boston for Ogdensburg, N. Y., February 8, 1865, in command of Company B, First Battalion, Frontier Cavalry, for guard duty on the frontier, and was in command of the Port at Ogdensburg, from March i8th to June 24, 1865, having under his command Companies B, C and D, First Battalion Frontier Cavalry 26th Regiment, New York Volunteer Cavalry.  Captain Rhoades returned to Boston at the close of the war, and has for many years been identified with the Boston Custom House. In 1884 he was elected president of the regimental Association.

Posted by Dennis Segelquist at 11:58 AM