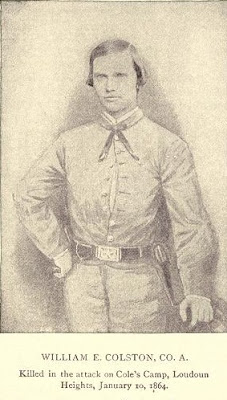 William E. Colston was born in Washington, March 24th, 1839, but his early years were spent in Virginia, the home of his ancestors. He came to Baltimore about 1857, and was among the first to go to Virginia when the war broke out.

On June ist, 1861, he enlisted as a private in Company B, Maryland Guard, attached to the 21ist Virginia Infantry, but when the First Maryland Regiment was formed was transferred to Company H,
Capt. Wm. H. Murray, June i8th, 1861. In this company he served in all the campaigns and battles of the year, and at the battle of Cross Keys, June 8th, 1862, in Jackson s Valley Campaign he was desperately wounded, being shot through the body. He was permanently injured by this wound and disabled for a long time, but as soon as able to ride he was appointed Volunteer Aid to Major-Gen-
eral Trimble. General Trimble being wound ed and left at Gettysburg, Colston then volunteered into Mosbys command, and was killed in the night at tack on Harper s Ferry, January loth, 1864. He is buried in the Confederate lot at Loudoun Park with his old comrades of Company H, First Maryland Infantry.  A Memorial Room to him has been furnished in the Confederate Home at Pikesville, Md., by his brother, Capt. Frederick M. Colston.
Posted by Dennis Segelquist at 12:19 PM