Surgeon Benoni Carpenter was born in Rehoboth, Mass., March 12, 1805. lie attended the public schools of that town in his youth, and entered Brown University in the class of" 1839. In 1832 he graduated from Jefferson Medical College, Philadelphia, Penn, and, tattling In Pawtucket, began the practice of medicine.

Dr. Carpenter entered the service of his country in the War of the Rebellion, as surgeon of the Twelfth Rhode Island Infantry, Oct. 13, 1862, and served with it during its term of service until its final muster out, July 29, 1S63. Dr. Carpenter's son, Frank II. Carpenter, was hospital steward in this regiment. Dr. Carpenter again entered the service as surgeon of the Fourteenth Rhode Island Heavy Artillery. His commission is dated Oct. 16, 1S63, and he was remustered to date Sept. 5, 1863. He made his headquarters with the Third Battalion at Camp Parapet, La. Here, in addition to the duties of surgeon of the post, he was appointed acting medical director and inspector of the District of Carrollton, June 15, 1S64. Lieutenant-Colonel Viall pays this just tribute to Dr. Carpenter: "To Dr. Benoni Carpenter, surgeon of the regiment, great credit was due for his skillful and efficient efforts for the care of the sick. He was mustered out with his regiment Oct. 2, 1865.

After the war he resumed the practice of his profession in Paw tucket, R.I. He was for several years a member of the school committee of the old town of Pawtucket, and served his constituency in both branches of the General Assembly of the State. He was a member of the Rhode Island Medical Society.

Dr. Carpenter was married in 1S33 to Miss Adelaide Everett, of Wrentham, Mass. By a mysterious dispensation of Providence, he and his wife died within a few days of each other. His wife after a long illncs died Nov. 17, 1S77. Her funeral was to have taken place on the Tuesday following. On the morning of that day Dr. Carpenter appeared to be in his usual health, but shortly after breakfast he was seized with a fit of apoplexy, and despite the best of medical assistance remained in an unconscious state until the next morning (November 22d) when he died.

The funeral of his wife was postponed in consequence of his sudden demise, and his six children four sons and two daughters who were called together for the first time in twelve years by the death of their mother, followed a few days later both of their parents to the grave at the same time, the double funeral occurring at the Congregational Church in Pawtucket, Nov. 23, 1S77.
------------------------- 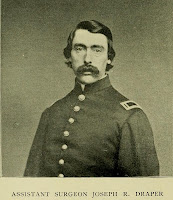 Assistant Surgeon Joseph R. Draper was born in Wayland, Mass., June 30, 1830. In early life he attended the common schools, and after wards the Mayland Academy. After the death of his father, which occurred when he was fourteen years of age, he entered Lawrence Academy, Groton, Mass., where he remained three years. At the end of that time he entered Williams College, and graduated in 1851. He spent several years teaching the High Schools of Saxonville and Milford, after which he spent a year and a half in the south. After his return he studied medicine in the Harvard and Berkshire Medical Schools, and graduated from the latter in 1862. He entered the Medical Department of the United States army in 1862, and was assigned to service in the Armory Square Hospital, Washington, D. C. Dec. 1, 1S63, he was commissioned assistant surgeon of the Fourteenth Rhode Island Heavy
Artillery, and served with that regiment in the Department of the Gulf.  He was mustered inDec.11, 1863, and assigned to the First Battalion. After his discharge from the army, which occurred on the second day of October, 1865, he practiced his profession in South Boston for more than twenty years, where he was much respected and trusted, both as a citizen and a physician. He died Aug. 5, 1885. His son, Dr. Joseph R. Draper, is a practicing physician in South Boston.
Posted by Dennis Segelquist at 5:27 PM