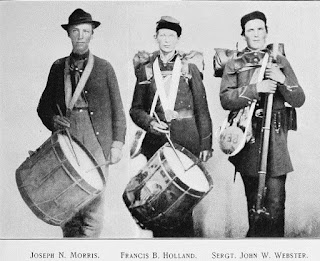 Push to enlarge.
Joseph Nelson Morris, son of Benjamin D. and Mary E. Morris, was born in Bristol, Aug. 24, 1842. He enlisted as a drummer, but participated In all the battles, marches, and sieges that fell to the lot of the regiment. On his return home he learned the cooper's trade and followed It for several years. In 1874 he entered the employ of  W. H. Buffington, with whom he remained nine years, meanwhile studying pharmacy and passing a successful examination. In 1883 he built and opened a drug store on Hope Street, between Church and Constitution Streets, which he conducted up to the time of his death, which occurred Oct. 23, 1895. He married Mary Dunbar, of Bristol, Jan. 31, 1867. She preceded him to the spirit world by about one year. Two daughters, a father, and a sister, Mary L. Morris, survived him. He was a past commander of Babbit Post, No. 15, Grand Army of the Republic, and a member of Major James F. DeWolf Camp, No. 8, Sons of Veterans, of the United Brothers Lodge, No. 15, Independent Order of Odd Fellows, of Wampanoag Encampment, No. 9, and of Moict Hope Council, Royal Arcanum. His remains were interred in the North Cemetery.

Seegeant John W. Webstek was employed, at the outbreak of the Rebellion, in Westerly, R. I., and therefore enrolled himself In the Westerly Rifles, Company I, First Rhode Island Detached Militia. Concerning his service In the Seventh, it has been said that he never was absent from the command, that he was off duty but a single day, and that he never was wounded, though he had at least one narrow escape. A bullet struck his watch, glanced, and Imbedded Itself in a Testament, which he carried in his pocket. For a long time after his muster out, he was watchman and engineer at the Peacedale Mills, South Kingstown. For a year prior to Thursday, July 16, 1896, his health had been gradually falling. On that date he fell near the door of his home and his daughter was obliged to assist him in rising and entering the house. His strength continued to decline, and he passed from earth the following Wednesday, July 22d, in his fifty-ninth year. His funeral was two days later, from the Methodist Church, Peacedale. His wife had preceded him some four years. Besides the daughter, three sons survived him.

Posted by Dennis Segelquist at 11:43 AM