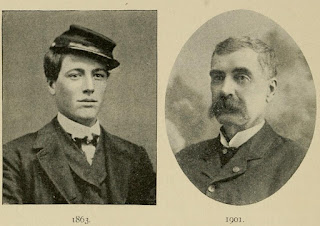 At the Battle of Yellow Tavern, May 11th, 1864, our Regiment was ordered to charge up a hill by column of ours through a cut, but meeting with such fierce resistance the cut soon became so blocked with dead men and horses that further advance was impossible, and we were then ordered to dismount and fight on foot. As we charged up the hill and through the timber we came to a cleared field. Comrades Adams, Burk and myself of Co. "A" were together; "there might have been others with us, but do not remember." To our right and front we could see what I took to be the 1st Michigan cavalry charging mounted Rebels ; to our left on a hill about twenty-five rods from us was a group of Confederate officers ounted and standing still, displaying a fine battle flag. Adams said, "Let's go for that flag," and suiting the action to the suggestion, started to climb the fence,; I pulled him back, saying, "We can reach them from here," and taking aim across the fence I fired.  An officer fell forward on his horse, others of the group took hold of him and immediately rode to the rear over the hill out of sight, Adams remarking, "You have winged one of them." There has been much speculation as to who shot the Rebel General Jeb. Stuart, who was wounded that day, dying the next. The 1st Vermont, 5th and 7th Michigan all have claimants. If General Stuart was shot with a revolver bullet or by a mounted soldier, I have no claim, but if he was shot with a carbine bullet while mounted and standing with the group with the battle flag, I have every reason to believe that my bullet did the work, as it certainly hit some officer, be it honor, murder, or whatever it may be called.

At the Battle of Smithfield, August, 1864, Co. "A" was thrown across the river, "I think the Opequon," through a covered bridge ; advancing about eighty rods we were deployed on a ridge parallel with the river. I was on the extreme left of the line and the country to my left and front was open, on my right and front, timber. I soon heard a bullet zip by, but could not see where it came from. I soon saw a puff of smoke from a tree top about forty rods in front of me, and a bullet struck the L of C., ground about four feet to my left. Dismounting and laying my carbine across my saddle, I fired. The next bullet from my friend struck the ground at my feet, the next hit my horse, inflicting only a slight wound. We exchanged six or seven shots when I saw my Confederate friend slide down the tree and hostilities ceased. As I was a very good shot and my Confederate friend certainly was, I rather enjoyed the scrap and paid little attention to the rest of the line. Hearing rapid firing on my right, I mounted and looking to the right and rear I saw our men just entering the bridge and a number of Confederates right on their heels. I made straight for the river, about thirty rods below the bridge, when five or six Rebels started to head me off, firing their revolvers and yelling, "Surrender, you Yank!" On nearing the river I saw that the bank was about four feet above the water, so throwing my feet out of the stirrups and giving my horse both spurs, he made a great leap into the river, landing in deep water and pulling for the other bank, which was low. As I rode out the Rebels on the opposite bank were still firing their revolvers at me, so I gave them one parting shot, not stopping to see where my bullet went, but  rode up the hill and joined the Regiment, dripping wet. Adjutant Charlie Pratt, formerly of Co. "A," said: "I want to congratulate you on your escape; I watched your race for the river and remarked to the Colonel that you were a goner this time and it looked that way to me for a time."

In October, 1864, Sheridan's Army lay stretched across the Shenandoah Valley on the north bank of Cedar Creek facing south. On the night of the 18th our Regiment was detailed for picket on the right flank. After posting our pickets well in front on the south side of the Creek, we went into camp on a hillside on the north bank. After eating our supper and feeding our horses, everything being quiet, we went to sleep, leaving our horses saddled and bridled. During the night the Rebel Infantry quietly stole through our picket line in front of our Infantry, marched along the bank of Cedar Creek between the picket line and our army and created no disturbance until they struck the camp of the 7th Michigan Cavalry.

The first thing I heard was a volley of musketry at close range and the zipping of bullets. Every one was on their feet and mounting their horse in a moment ; officers were shouting for their companies to fall in ; evidently the order was understood for us to fall back, as everybody broke for the rear. It was just at daybreak, but so foggy we could see little but could hear a good deal. We were in a pocket formed by a high bluff on the west, a board fence on the north, and the Rebels on the south and east. There was a narrow gap in the fence near the bluff and all seemed anxious to be the first one through it. I was riding a horse at that time known as "Dan Rice," on account of his circus performing habits, which consisted of his balking or standing still and kicking when first mounted. Whether he thought he would show more courage than the men and stand his ground and kick the Rebels back into the Creek or what, I never knew, but he stood still and kicked, and the more I spurred him the higher he kicked. The Rebels were getting very close for I could hear their voices very plainly as one said, "There is a good horse, Sam, catch him." I do not know whether he meant my horse or not, but do not think Sam would have dared gotten near enough to Dan to catch him while he was kicking. All this time the Rebels were advancing and firing; bullets went zipping past me, and it seemed to me that every one of them hit the fence near me. "I can almost hear them now, over thirty-seven years later." The thoughts of Andersonville made the situation desperate, and having my carbine in my hand I struck Dan on the head which knocked him down. I stuck to the saddle and when he regained his feet he was ready to go, and so was I. Riding through the gap, I circled to the right and soon found the Regiment in line on higher and more open ground, actively taking part in the great battle which has gone down in history as the Battle of Cedar Creek.
Posted by Dennis Segelquist at 11:02 AM