The Essex Battle at Fort Henry. 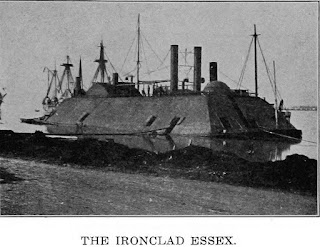 The fire was opened at 1,700 yards' distance from the flag-ship, which was followed by the other gunboats, and responded to be the fort. As we approached the fort under slow steaming till we reached within 600 yards of the rebel batteries the fire both from the gunboats and fort increased in rapidity and accuracy of range. At twenty minutes before the rebel flag was struck the Essex unfortunately received a shot in her boilers, which resulted in wounding, by scalding, 29 officers and men, including Commander Porter, as will be seen in the inclosed list of casualties.* The Essex then necessarily dropped out of line astern, entirely disabled, and unable to continue the fight, in which she ha so gallantly participated until the sad catastrophe. The firing continued with unabated rapidity and effect upon the three gunboats as they continued still to approach the fort with their destructive fire until the rebel flag was hauled down, after a very severe and closely contested action of one hour and fifteen minutes.

A boat containing the adjutant-general and captain of engineers came alongside after the flag was lowered, and reported that General Lloyd Tilghman, the commander of the fort, wished to communicate with the flag-officer, when I dispatched Commander Stembel and Lieutenant-Commander Phelps, with orders to hoist the American flag where the secession ensign had been flying, and to inform General Tilghman that I would see him on board the flag-ship. He came on board soon after the Union had been substituted for the rebel flag by Commander Stembel on the fort and possession taken. I received the general, his staff, and 60 or 70 men as prisoners, and a hospital ship containing 60 invalids, together with the fort and its effects, mounting twenty guns, mostly of heavy caliber, with barracks and tents capable of accommodating 15,000 men, and sundry articles, of which, as I turned the fort and its effects over to General Grant, commanding the Army, on his arrival in an hour after we had made the capture, he will be enabled to give the Government a more correct statement than I am enabled to communicate from the short time I had possession of the fort. The plan of the attack, so far as the Army reaching the rear of the fort to make a demonstration simultaneously with the Navy, was prevented by the excessively muddy roads and high stage of water, preventing the arrival of our troops until some time after I had taken possession of the fort.


On securing the prisoners and making necessary preliminary arrangements I dispatched Lieutenant-Commander Phelps, with his division, up the Tennessee River, as I had previously directed, and as will be seen in the inclosed order to him,* to remove the rails, and so far render the bridge incapable of railroad transportation and communication between Bowling Green and Columbus, and afterwards to pursue the rebel gunboats and secure their capture, if possible. This being accomplished and the Army in possession of the fort and my services being indispensable at Cairo, I left Fort Henry in the evening of the same day, with the Cincinnati and St. Louis, and arrived here this morning.

The armed gunboats resisted effectually the shot of the enemy when striking the casemate. The Cincinnati [flag-ship] received 31 shots, the Essex 15, the St. Louis 7, and the Carondelet 6, killing 1 and wounding 9 in the Cincinnati and killing 1 in the Essex, while the casualties in the latter from steam amounted to 28 in number. The Carondelet and St. Louis met with no casualties. The steamers were admirably handled by their commanders and officers, presenting only their bow guns to the enemy, to avoid exposure of the vulnerable parts of their vessels. Lieutenant-Commander Phelps, with his division, also executed my orders very effectually, and promptly proceeded up the river in their further execution after the capture of the fort. In fact, all the officers and men gallantly performed their duty, and, considering the little experience they have had under fire, far more than realized my expectations.

Fort Henry was defended with the most determined gallantry by General Tilghman, worthy of a better cause, who, from his own account, went into the action with eleven guns of heavy caliber bearing upon our boats, which he fought until seven of the number were dismounted or otherwise rendered useless. Very respectfully, your obedient servant, A. H. FOOTE, Flag-Officer, Commanding U. S. Naval Forces Western Waters.


* Casualties of the Essex.